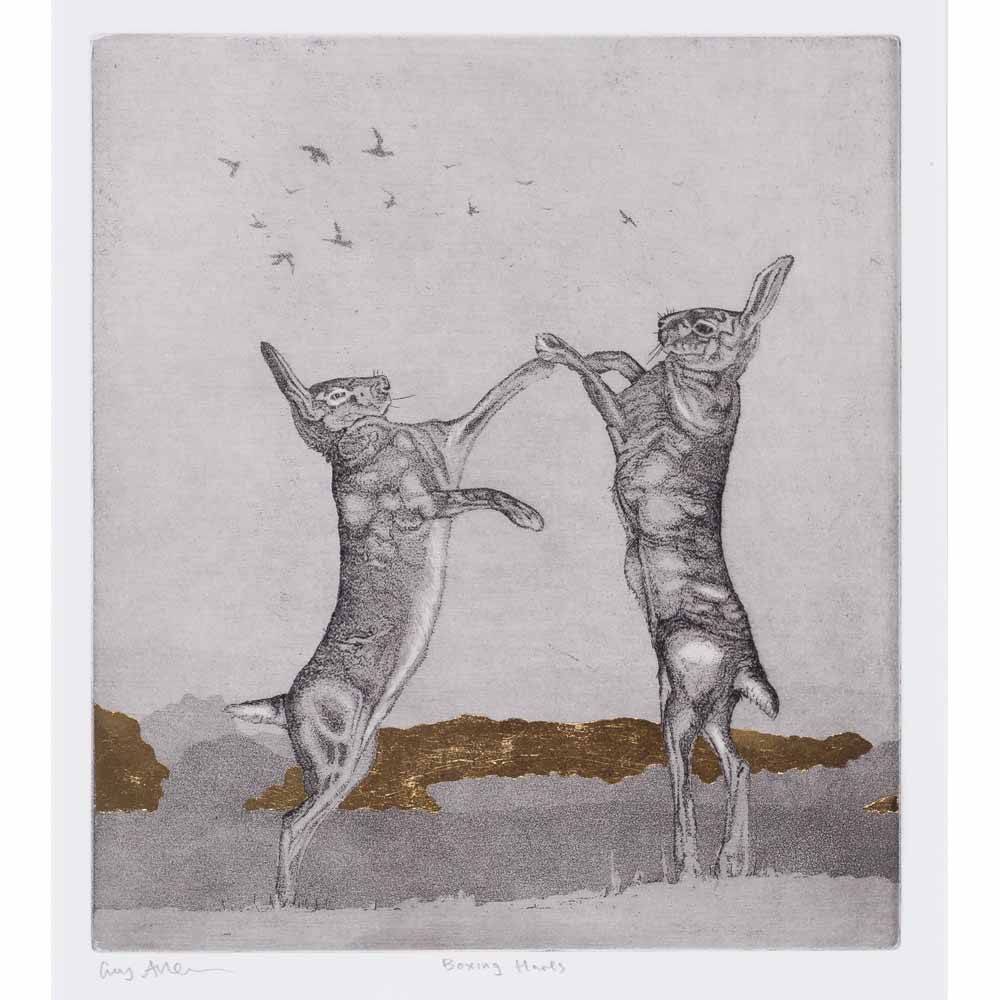 We are fortunate enough to still have a few copies available of this fantastic etching by Guy Allen in stock.  ‘Boxing Hares’ was an incredibly popular original print from this talented Norfolk-born printmaker which has now come to the end of its 75 edition.

This print is created with etching, aquatint and hand finished gold leaf.  Guy has embossed the edition run and his studio stamp beneath the image.  Each print is titled, numbered and signed by the artist. Mounted in a deep off white,  framed with a contemporary grey wooden moulding to complement the print and glazed with Clarity glass for reflection free viewing.

Also available unmounted, backed with conservation board and wrapped in acetate.

Guy Allen was born in 1987 in Norfolk, United Kingdom. Today, he is a successful international artist, with work exhibited in Dubai, New York and London and in private collections in Los Angeles, San Francisco, New York, Singapore and Hong Kong.

Guy discovered his passion for print making during his time in Paris studying at the École Nationale Supérieure Des Beaux-Arts in 2010, when he became particularly fascinated with the traditional etching process. Following his graduation from Central Saint Martins School of Art in 2011, he moved back to Norfolk for 18 months, from where – despite now living and working in London – he still finds his inspiration.

In 2012 Guy trained as an assistant print maker under Mary Dalton and Stanley Jones at Curwen Studios in Cambridge, where he had to learn at a fast clip how to master other types of print making. In 2013 and 2014 he had one of his etchings selected to be exhibited in the prestigious Royal Academy Summer Exhibition in London.

Guy is an accomplished print maker and to create his pieces he has married the traditional technique of etching with a timeless subject matter and print-making process for a more contemporary twist. The stages involved in creating these original prints include etching, aquatint, screen print and lithography.